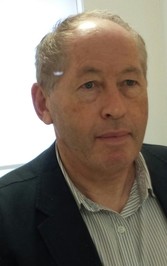 R.J. Gould writes humorous contemporary fiction, loosely romantic, but with an edge as he explores family relationships across age, gender and class. There is some emphasis on the baggage accumulated by middle-aged protagonists as they attempt to balance the pressures of work, children and new romances. A male perspective on these issues provides a refreshingly original viewpoint.

Gould was selected for the New Writers' Scheme of the Romantic Novelists Association in 2014 and following this accolade was taken on by publisher Accent Press. 'A Street Cafe Named Desire' was released in December 2014 and 'The Engagement Party' in May 2015.

Gould is a member of the Society of Authors and of Cambridge Writers, where he leads the Commercial Editing Group. He was the organisation's short story competition winner in 2010, awarded third place in 2015, and his writing was commended in 2012 and 2014.

He works for a national educational charity and has published in a wide range of educational journals, newspapers and magazines, but writing fiction is his passion.