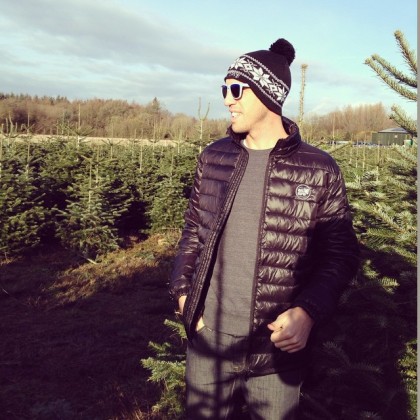 Tom was born in Watford, London on the 15th May 1980. He lived with his parents in London until he saw the error of his ways only a couple of years later, whereupon his family moved back to his father’s homeland of South Wales. It was inevitable that he would be drawn to the sea since his grandfather had been a top lifesaver and his father a successful competitive surfer ‘back in the day’.

Always a lover of literature, Tom grew up addicted to the novels of Willard Price, Enid Blyton and CS Lewis. He began surfing at the age of 11 and moved to the seaside town of Porthcawl at the age of 13. He saved up for his first custom surfboard at the age of 14 after doing a milk round for 27 weeks (=270 pounds!) working from midnight until five AM every Friday night, under the watchful eye of long-time Porthcawl Point local Gez McKay (who has since joined the police “cause it gives you even more water time than a milk round”). By the age of 16 Tom had gained a place on the Welsh Junior Surfing team and British Junior Development Squad.

After finishing school, Tom began to travel abroad as much as possible in search of better waves. During a degree in English at the University of Glamorgan, the Student Loans Company funded a large proportion of the travel which went on to form the basis of the Magic Carpet storyline. Further trips to the US East Coast and around the UK led to Chasing Dean and Grey Skies Green Waves. He still had to get the odd job though, and has done just about everything, including such ‘trades’ as golf caddy, caravan cleaner, bailiff, suit salesman, dishwasher, ice-cream bike operative, barman, line-feeder at a Sony factory, private investigator, canine dental machine repairman teacher and obviously surf shop assistant.

Tom’s favourite book of all time is either Moby Dick or Haruki Murakami’s Kafka on the Shore. Nowadays his literary influences include Raymond Chandler, Ruth Ozeki, Jonathan Raban, DBC Pierre and Steinbeck. Above all, though, Tom claims the best writing he has ever come across is HBO’s five-season drama series The Wire, which he claims is ‘the best thing ever made of any kind in any sort of creative medium’.

Tom’s interests away from surfing and literature include watching the Welsh Football Team and Arsenal, longboard-skateboarding, poker, snowboarding, basketball, reading and writing (of course) and scheming for other ways to fund more surf travel.

Tom’s debut thriller, The Actaeon Tide, came out in the autumn of 2014, while Code Black will tell tales of the heavy winter storms that hit Wales and the South West last year. Tom is also the current Chair of the Welsh Academy, as well as an adept broadcaster and public speaker. For more info on professional engagements see this Writers of Wales page. He is currently working on a young adults novel with a top-secret working title.