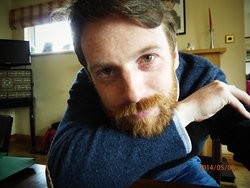 Born in Northern Ireland, Edward Ruadh Butler studied Biomedical Sciences in Ireland and business in the US before working in newsrooms, bars, and laboratories, as a security guard, musician, and a lifeguard.

A keen reader of historical fiction from his youth, he decided to try and emulate his heroes - Conn Iggulden, James Fenimore Cooper, Bernard Cornwell, H. Rider Haggard, Robert Louis Stevenson, and George MacDonald Fraser - and write an adventure. He began by writing about Ireland in the 12th century during his lunch hour, and a year later he had completed the first draft of his debut novel, Swordland. The book charts the remarkable career of Robert FitzStephen, a Norman-Welsh warrior who became the first invader of Ireland in 1169.

Find Ruadh burbling about all things Ireland, Norman, historical, and rugby on his author page on Facebook, and on Twitter at @ruadhbutler. He is currently writing a sequel to Swordland set in 1170.